The Dons travel to the Silverlink Stadium more in hope than expectation of coming away with three points. The Spitfires professional 2-0 victory at Kingsmeadow on that chilly night back in December is remembered more as a poor Dons performance but in truth they weren’t given a chance to find any kind of rhythm by an Eastleigh side who well and truely ‘did a job’ on the leaders, and up until last Saturday were the only side to come away with the points at Kingsmeadow this season.

Prior to the November encounter the sides had only met twice before, an FA Trophy third qualifying round encounter that went all the way following a 1-1 draw at TCCFSK and 2-2 down at Eastleigh. Dave Andersons Dons eventually coming out 4-2 winners on penalties.

Showing decent form and only conceding those heartbreaking two late goals at Trumpton in their last five games. Eastleigh are a side which despite featuring no truely standout players, contain plenty of height and strength throughout the team, work as a unit, and as we saw at Kingsmeadow are quick to prevent opponents playing, allowing them to dominate aerially, using set pieces to great advantage. Former Chelmsford striker Bertie Brayley recently took a few weeks holiday down by the south coast, but judging by the speed he returned to the Clarets he probably won’t be remembering the time with great fondness.

They reminded me very much of Wimbledon during the 90’s when they visited Kingsmeadow. And on Saturday they will experience what those Dons teams used to absolutely relish, the league leaders bringing loads of fans with them, and a chance to knock them down a peg. Eastleigh will have reasons of their own for wanting three points on Saturday. Currently ten points behind, a win on Saturday followed by three points against St Albans will put them four points behind the Dons, and right back in the title race.

The big news is the possible absence of influential hitman Danny Kedwell, who is struggling with an ankle injury. Expect Kezie Ibe to make a first start in a blue shirt (or yellow…), and for the sake of everyones blood pressure hope his partnership with Jon Main clicks immediately. Judging by comments earlier in the week Kedwell may be fit enough for a place on the bench (and if you were TB would you really want to be the person to tell him he isn’t?!). Even if we can get 20 minutes out of him it could be vital, especially if we find ourselves chasing the game.

The choice of which midfield starts could decide the game. Terry has spoken earlier in the week of making more use of Saunders, so perhaps he could find himself in the role Kennedy played in the first hour against Welling. Hopefully Lee will have benefited from a week of uninterrupted training, and I expect him to retain his place on Saturday ahead of Kennedy Adjei or Jake Leberl, the latter could conceivably be selected ahead of Lee for his battling ball winning qualities alone, however Brown has already stated his desire to stick with this seasons philosophy of working the ball rather than panicking and trying to beat the Spitfires at their own game.

In defence the reassuring figure of Ben Judge returns from suspension, we can all be delighted to know should all else fail he has a great rugby tackle in his locker… and James Pullen comes up against his old side, and judging by their supporters forum are looking forward to seeing his solid distribution from the other side of the fence…

Them – Naturally very excited that our visit coincides with the run in to what has already been one of their most successful seasons to date, as well as having an excellent chance of taking the game. Have apparently sold 1400 tickets (not sure if that includes our sales too) as of yesterday, and could be looking at a crowd close to 3000 depending what the walk up is like on the day.

Us – Battling through rail replacement buses and confusion regarding the best route to the ground. Eastleigh recommend disembarking from Eastleigh station, a couple of miles from the ground, then bussing it the rest of the way but they would do wouldn’t they? They aren’t going to put the backs up of current and potential sponsors based closer to the town centre by advising the largest travelling support they’ve had for ages to bypass the pubs and shops altogether are they? 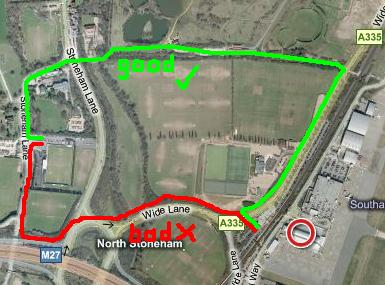 Southampton Airport Parkway is the closest station as the crow flies but the route that looks most direct seems to feature a trip down the M27 slip road, following a tumble down an embankment. I’ve already done that once this season, at Thurrock, where a wrong turn found me sixty feet above the road I was supposed to be on. I had to jump over a bridge fence and wobble down to the road below, almost falling when a fat Essex boy in a van decided to shout ‘OI!’ at me when I was half way down. It was an act of desperation caused by my realisation I’d left the wife at Lakeside with the bank cards…

Anyway, earlier this week a kindly Eastleigh fan posted directions on Old Centrals for a safer walking route, I hope I followed them correctly on the wiggly green line above. If anyone spots an error there, please leave a comment and let us all know! Me, I’ll be following any Dons fans that look like they know what they are doing, assuming they had experience of the Trophy game a couple of years ago.

Numbers? There are Dons fans who would walk it if they had to, combined with knowing once you get out of London the disruption won’t be too bad, and the large numbers travelling by road, and I’ll guess around one thousand of us.

Are they really giving 15/2 for a goalless draw? I may even take that myself, despite my terrible record betting on my own team. That 6-0 win we are all secretly expecting is 125/1 by the way…

Dons fans aren’t universally confident of coming away with a result from this one. In my heart, if we show any kind of weakness we are there for the taking. We have to hope Terry sets the team up perfectly, and the players are up for a battle, I mean really up for a battle, because they’re going to get it from the start. No score prediction today, just a message to the players. You want to win the league this year? Go prove it.